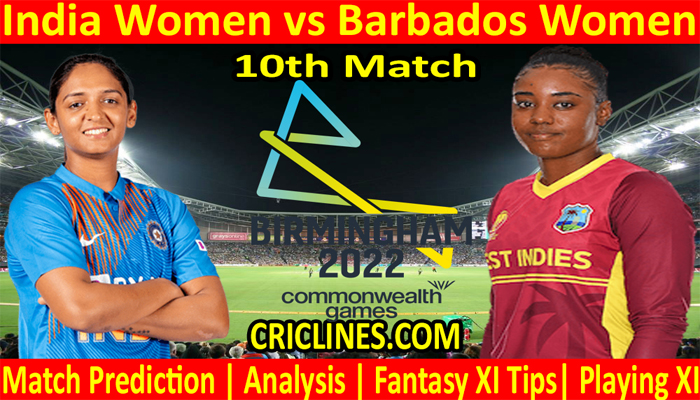 The cricket fans are ready to witness yet another big battle of The 100 League. The 10th Match of Commonwealth Games Women’s Cricket Competition 2022 is scheduled to play between India Women and Barbados Women on Wednesday, 3rd August 2022 at Edgbaston, Birmingham. We are posting safe, accurate, and secure today match prediction for all matches of the Commonwealth Games Women’s Cricket Competition free.

India Women lost the opening match of Commonwealth Games Women’s Cricket Competition-2022 against Australia Women but they bounced back strongly and won the very next match against Pakistan Women. They still have a chance to qualify for a playoff and for that, they have to win this match at any cost. Barbados Women also had played two matches so far. They beat the strong team, Pakistan in their opening match but lost against Australia. They also have to win this match to have some chances to move to the next level of the Commonwealth Games Women’s Cricket Competition.

India Women get the good form back after losing the opening match against Australia. They have a good record while playing against Pakistan and they repeated the good history. They dominated team Pakistan in almost each and every department of the game. The performance of their bowling unit was just superb. They leaked 99 runs in 18 overs while bowling first. Remember that the match was reduced to 18 Overs due to rain. Renuka Singh, Meghna Singh, Deepti Sharma, Sneh Rana, Radha Yadav, and Shafali Verma handled the bowling department of India very comfortably. Sneh Rana proved the most successful bowler in the previous match against Pakistan who picked two wickets in her four overs against 15 runs.

Radha Yadav was the other bowler from the side of India who picked two wickets in her three overs while she leaked 18 runs. Shafali Verma and Singh Sisters picked one wicket each. The way how the batting order of India performed in the previous match was just superb. They chased the target of 100 runs in 11.4 overs. Smriti Mandhana was the most successful and highest run-scorer from their side who remained not out after scoring 63 runs on 42 balls with the help of eight boundaries and three huge sixes. Shafali Verma scored 16 runs while Sabbhineni Meghana remained not out after scoring 14 runs.

Barbados Women surprised everyone when they beat Pakistan in their very first match. Many of today prediction providers were expecting that they will give a tough time to almost all teams in their group but sooner Australia dominated this team in the very next match and send their full team back to the pavilion on a total of just 64 runs in 20 overs. The skipper, Hayley Matthews was the only batter from their side who could manage to enter into the double figure. She scored 18 runs on 13 balls with the help of four boundaries. No other batter from the side of Barbados could even enter into the double figure.

Deandra Dottin and Kycia Knight are opening the batting inning for Barbados but they were not good in the previous match. K Knight, Aaliyah Alleyne, Trishan Holder, and Alisa Scantlebury are handling the middle and lower batting order of this team. The bowling department of Barbados Women was also very poor in the previous match. They failed to defend a low target on the board and leaked the target of 65 runs in just 8.1 overs. Barbados Women was the only bowler from their side who had a wicket to her name. No other bowler from their side could manage to pick any wicket.

India Women is full of experienced and young players of the t20 foramt. The batting order of this team is also strong and some well-known hitters of the t20 format are part of the squad of this team, so the winning chances of today match for India Women have been increased. The equation of who will win today cricket match prediction and who will win the cricket match today is mentioned as under.

The toss will play an important role in the decision of all matches of the Commonwealth Games Women’s Cricket Competition 2022. Having a good total on the board is always a big advantage in these kinds of big matches. According to toss prediction, the team who will win the toss may choose to bat first.

The 10th Match match of the Commonwealth Games Women’s Cricket Competition 2022 is going to be held at Edgbaston, Birmingham. We had observed in the previous matches played here that the pitch here at this venue is good for batting. The track is slower than the others we have seen and helps the spinners quite a bit. We are hoping that the surface is bound to get slower and be a bit more difficult for batting in this match. A score of 185 is going to be tough to chase.