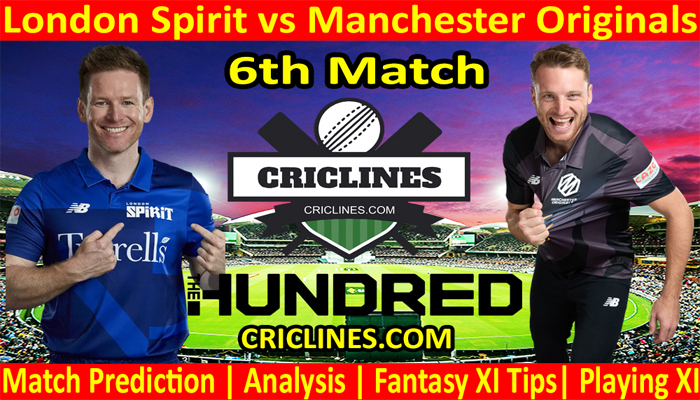 The world is ready to witness yet another big battle of The 100 League. The 6th match of The Hundred League 2022 is scheduled to play between London Spirit and Manchester Originals on Monday, 8th August 2022 at Lord’s, London. We are posting safe, accurate, and secure today match prediction of The Hundred Women Competition free.

The second edition of The Hundred League is on the way and we had witnessed five exciting competitions so far. The next match is between London Spirit and Manchester Originals. London Spirit had opened the account on the points table as they won their opening match against Oval Invincibles. That was a very interesting match which LNS won with a margin of just three runs. Manchester Originals is a strong side of this tournament but lost the opening match of this season of The Hundred League against Northern Superchargers by a big margin of six wickets. Manchester Originals lost the first match but our reports of match prediction are confirming that they will win this match.

Eoin Morgan is leading London Spirit in this tournament and had registered the first win. The batting order of London Spirit performed well in the opening match and scored 171 runs on 100 balls inning. Zak Crawley and A Rossington opened the batting inning for LNS while Glenn Maxwell, Lawrence, Eoin Morgan, and Kieron Pollard are available to handle the middle and lower batting order. Eoin Morgan was the highest run-scorer in the first match with 47 runs to his name in 29 balls with the help of five boundaries and three huge sixes. Zak Crawley also performed well with the bat and scored 21 runs while Pollard remained not out after scoring 19 runs.

The bowling department of London Spirit is also strong and experienced which is led by Nathan Ellis, Chris Wood, Jordan Thompson, Liam Dawson, and Mason Crane. They were not good in the first match even though they defended the target of 172 runs but leaked 168 runs in 100 balls inning. Nathan Ellis was the only successful bowler from their side who picked three wickets in 20 balls against 28 runs. Jordan Thompson had two wickets to his name in 20 balls while he was charged for 31 runs. Liam Dawson and Mason Crane picked one wicket each. Chris Wood and an experienced bowler but he proved the most expensive bowler in the opening match as he leaked 44 runs in 20 balls and failed to pick any wicket.

The mean reason why Manchester Originals lost the first match was the poor performance of the bowling department. The performance of their batting order was good and they put a total of 161 runs on the board in the inning of 100 balls. Almost all batters from their side put some runs on the board. Jos Buttler is the skipper of this team and he is also leading the batting order with Philip Salt, W Madsen, Andre Russell, P Walter, and Laurie Evans. Jos Buttler was the most successful and highest run-scorer from their side who scored 59 runs on 41 balls with the help of six boundaries and one huge six. W Madsen was the other batter who was just good with the bat. He scored 43 runs.

Andre Russell remained not out after scoring 29 runs on just 20 balls. He smashed three huge sixes during his inning. P Walter scored 23 runs. Tom Hartley, Fred Klaassen, Sean Abbott, Matthew Parkinson, Andre Russell, and Ashton Turner are leading the bowling department of Manchester Originals but they failed to give the best performance in the previous match. They leaked the target of 162 runs in 94 balls. Ashton Turner, Andre Russell, Matthew Parkinson, and Fred Klaassen picked one wicket each.

Manchester Originals are overall a strong team as compared to the London Spirit at least on papers. According to The Hundred prediction, Manchester Originals are the favorite team who will win this match. There are many factors that make London Spirit a favorite team to win this match. Some of the key factors are mentioned as under:

Manchester Originals is full of experienced and young players of the t20 format. The batting order of this team is also strong and some well-known hitters of the t20 format are part of the squad of this team, so the winning chances of today match for Manchester Originals have been increased. The equation of who will win today’s cricket match prediction and who will win the cricket match today is mentioned as under.

The 6th Match match of The Hundred League 2022 is going to be held at Lord’s, London. We had observed in the previous matches played here that the pitch here at this venue is good for batting. The track is slower than the others we have seen and helps the spinners quite a bit. We are hoping that the surface is bound to get slower and be a bit more difficult for batting in this match. A score of 185 is going to be tough to chase.

Who Will Win London Spirit vs Manchester Originals, 6th Match The Hundred League-2022

We had provided you with the above-mentioned today prediction on the basis of our research, understanding, and analysis. You can consider the point we had provided you and the final decision will be yours at your own risk.