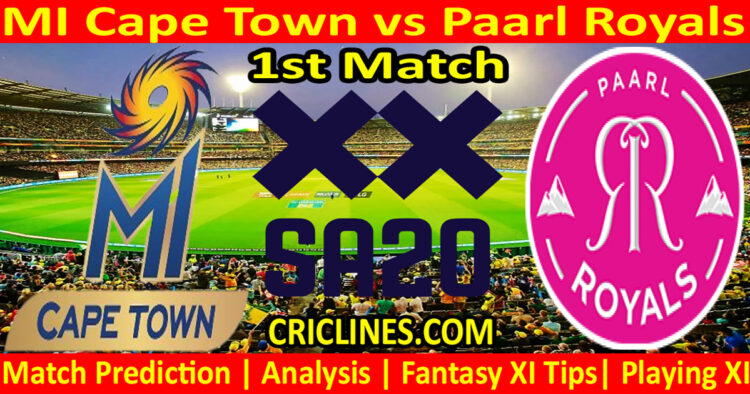 The world is ready to witness yet another big battle of the SA20 2023. The 1st match of the SA20 T20 League 2023 is scheduled to play between MI Cape Town and Paarl Royals on Tuesday, 10th January 2023 at Newlands, Cape Town. We are posting safe, accurate, and 100% secure today match prediction of SA20 T20 2023 with live SA20 scores and ball-by-ball updates with prediction.

SA20 T20 League is South Africa-based cricket league and it had renamed from Mzansi Super League. The first edition of the SA20 League is very interesting as almost all teams participating in this tournament are owned by different IPL franchises. MI Cape Town is owned by the owners of the Mumbai Indies. Remember that IPL franchises also own some teams in the first upcoming season of the International League which is going to be held in the United Arab Emirates.

MI Cape Town had added a lot of strength to their batting and bowling squads and we are sure that they will give a tough time to all other teams in this tournament. Rashid Khan had been leading the national team of Afghanistan and has a lot of experience. We are hoping that he will lead MI Cape Town in a positive way. The batting order of this team is strong at least on paper. Dewald Brevis, Liam Livingstone, Rassie van der Dussen, and Wesley Marshall are regular batsmen in the squad of Cape Town. Ryan Rickelton and Grant Roelofsen are wicketkeepers in this team.

Sam Curran had been sold as the most expensive bowler in IPL auctions. He was bought by Punjab Kings at the highest price ever in the history of IPL auctions. He will be leading the bowling unit of Cape Town with the skipper, Rashid Khan. They also picked some best bowlers of T20 cricket like Kagiso Rabada, Beuran Hendricks, Duan Jansen, Odean Smith, Ziyaad Abrahams, Olly Stone, and Waqar Salamkheil. Jofra Archer had been missing for the previous two years and he did not play for his national team (England) and not for any cricket league. He is now part of the squad of MI Cape Town and we think that he will play this match.

Paarl Royals is the other strong team of this 1st edition of the SA20 League. They had picked some best players around the world. David Miller is going to lead this team. The batting order of the Royals is strong and experienced at least on papers. David Miller, Jason Roy, Eoin Morgan, Evan Jones, and Mitchell Van Buuren are the main batsmen of the Royals. Jose Buttler and Dane Vilas are other experienced batsmen who are part of the squad of this team. We can say that Paarl Royals are the strongest batting side of the first edition of the SA20 League.

Paarl Royals also had picked some best bowlers for this tournament. Lungi Ngidi will be leading the bowling unit of this team with Obed McCoy, Tabraiz Shamsi is also part of the bowling squad of the Royals. We are sure that he will play a main role for his team in the conditions of South Africa. Corbin Bosch, Bjorn Fortuin, Imran Manack, and Ramon Simmonds are also part of the squad of Paarl Royals. Ferisco Adams, Codi Yusuf, and Andile Phehlukwayo are bowling all-rounders in the squad of this team. Andile Phehlukwayo is an experienced bowler and had played 38 T20 matches for South Africa.

Paarl Royals is overall a strong team when we compare it with MI Cape Town. They have the best players in the t20 format of cricket. The batting order of this team is also strong and some well-known hitters of the t20 format are part of the squad of this team, so the winning chances of today’s match for Paarl Royals have been increased. The equation of who will win today’s cricket match prediction and who will win the cricket match today is mentioned as under.

The 1st match of SA20 T20, 2023 is going to be held at Newlands, Cape Town. We had observed in the previous matches played here that the pitch here at this venue is good for batting in early overs. The track has a good amount of pace and bounce which allows the batsmen to the good cricketing shorts but this ground also have big boundaries which can be a plus point for the bowlers. A score of 190 plus seems to be a par score.

The weather forecast for Cape Town is good for this cricket match. There are almost no chances of rain in the region and we are hopeful that we will have a full match to enjoy.

Sam Curran, Rashid Khan, and Jose Buttler are key players to watch in this match.

Dream11 fantasy team lineup prediction for MI Cape Town vs Paarl Royals 1st Match SA20 2023. After checking the latest player’s availability, which players will be part of both teams and the possible tactics that the two teams might use as the best possible Dream11 team.

We had provided you with the above-mentioned today prediction on the basis of our research, understanding, and analysis. These prediction tips have also been based on the reports that we have from our different sources. You can consider the point we had provided you and the final decision will be yours that you have to make at your own risk.