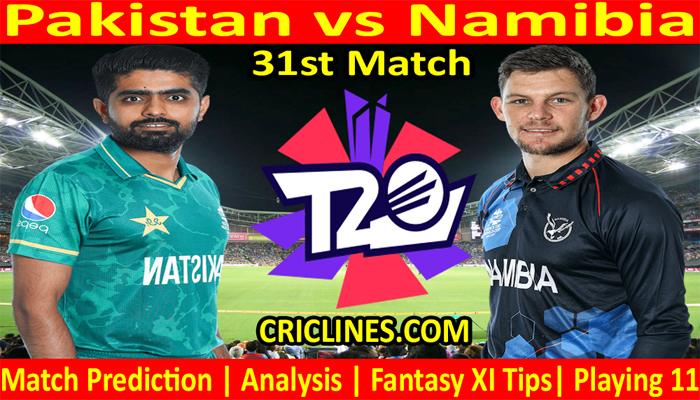 The cricket fans are ready to witness yet another big battle of World Cup T20. The 31st Match of World Cup T20 2021 is scheduled to play between Pakistan and Namibia on Tuesday, 2nd November 2021 at Sheikh Zayed Stadium, Abu Dhabi. We are posting safe, accurate, and secure today match prediction of ICC T20 World Cup free.

Three wins in three matches had put Pakistan on the top of the group 2 table and they have a clear chance to qualify for the semi-finals. They have two matches left and we are sure that they will win the remaining matches against the weak teams like Namibia and Scotland. Namibia had played two matches with one win and the other lost.

Pakistan had performed well in this edition of the ICC T20 World Cup as many of us were not expecting this. They beat India, a favorite team in their first match, and then New Zealand, in their second match. Their most recent match against Afghanistan was very interesting. At one stage, they were in a critical situation but the way how Asif Ali played the 19th over was just outstanding where he scored 25 runs with the help of four sixes in the over of Karim Janat. The batting order of Pakistan had been outstanding in this tournament till now.

Babar Azam had performed well in almost all matches. He scored fifty against India and was the highest run-scorer in the previous match against Afghanistan where he scored 51 runs with the help of four boundaries. He had become the first player who had scored 1000 runs as captain. Earlier, this record was on the name of Virat Kohli who scored 1000 runs as captain in 30 matches but Babar Azam had made this in just 26 matches. Asif Ali had played a key role in the win of Pakistan in both previously played matches. The bowling unit of Pakistan is also performing well. Shaheen Afridi, Haris Rauf, and Imad Wasim had performed well with the ball. Hasan Ali is out of form and we think that he will miss the next two matches.

Namibia had improved its cricket in some previous years. They qualified for the World Cup and then, they also qualified for the Super 12 stage. They beat Scotland in their first match but were beaten by Afghanistan in their most recent match by the margin of 62 runs. The performance of the bowling unit of Namibia was not good in the most recent match where they leaked 160 runs in their 20 overs inning.

Loftie-Eaton was the most successful bowler who picked two wickets in his four overs bowled out against 20 runs. Ruben Trumpelmann also picked two wickets but he was charged for 34 runs in his four overs bowled out. The batting order of Namibia also failed to give the best performance. They failed to chase the target of 161 runs and could manage to score 98 runs in their 20 overs inning. David Wiese was the highest run-scorer from their side who scored 30 runs with the help of two boundaries. Jan Nicol Loftie-Eaton could manage to score 14 runs.

Pakistan had never faced Namibia in T20 cricket and this will be the first match between these two teams.

Shaheen Afridi, Babar Azam, and David Wiese are key players to watch in this match.

Pakistan is full of experienced and young players of the t20 format. The batting order of this team is also strong and some well known hitters of the t20 format are part of the squad of this team, so the winning chances of today’s match for Pakistan have been increased. The equation of who will win today’s cricket match prediction and who will win the cricket match today is mentioned as under.

The 31st Match of World Cup T20 2021 is going to be held at Sheikh Zayed Stadium, Abu Dhabi. We had observed in the previous matches played here that the pitch here at this venue is good for batting. The track is slower than the others we have seen and helps the spinners quite a bit. We are hoping that the surface is bound to get slower and be a bit more difficult for batting in this match. A score of 170 is going to be tough to chase.

Who Will Win Pakistan vs Namibia, 31st Match WTC 21