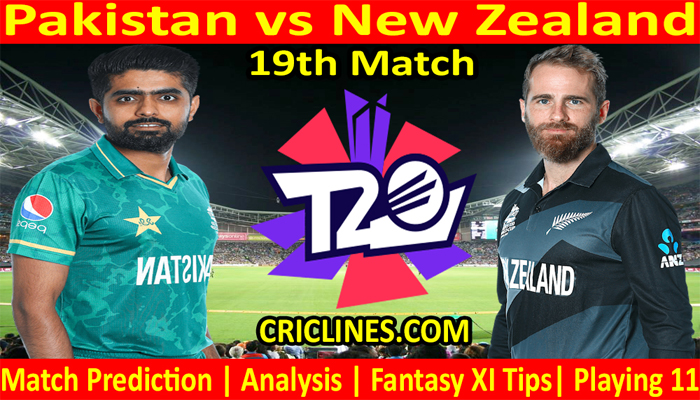 The cricket fans are ready to witness yet another big battle of World Cup T20. The 19th Match of World Cup T20 2021 is scheduled to play between Pakistan and New Zealand on Tuesday, 26th October 2021 at Sharjah Cricket Stadium, Sharjah. We are posting safe, accurate, and secure today match prediction of ICC T20 World Cup free.

Pakistan had finally broken the history of losing against India in the World Cup and had a kicked start to ICC T20 World Cup 2021. You may know that Pakistan had lost five matches in T20 World Cup against India and this was their first win. Pakistan totally outclassed India in each and every department of the game. They restricted on 151 runs and chased the target without losing any wicket. On the other side, New Zealand is going to play their first match in this tournament.

Pakistan made history by winning with a huge margin of 10 wickets against India. This had happened for the first time in their T20 cricket history that they had beaten not only India but any team with this margin. We must appreciate the performance of the bowling unit of Pakistan especially Shah Shah Afridi who picked three key wickets of Rohit Sharma, KL Rahul, and the skipper, Virat Kohli. He gave an early breakthrough in his 1st two overs by getting the wickets of Rohit Sharma and KL Rahul. Hasan Ali picked two wickets but he was the most expensive bowler as well. He leaked 44 runs in his four overs.

Shadab Khan was good with the ball in the previous match. He picked one wicket and was also very economical in his four overs, he leaked just 22 runs. Haris Rauf was the other bowler who was just good with the ball. He picked one wicket against 25 runs in his four overs bowled out. Imad Wasim and Mohammad Hafeez didn’t pick any wicket but they were economical bowlers. The opening batting pair of Pakistan had their history best performance in the previous match. They chased the target of 152 runs in 17.5 overs without losing any wicket. Mohammad Rizwan scored 79 runs on 55 deliveries with the help of six boundaries and three huge sixes at the strike rate of near about 144. The skipper, Babar Azam also followed Muhammad Rizwan and scored 68 runs. He faced 52 balls and smashed six boundaries and two huge sixes during his inning.

New Zealand had played just one warmup match before the start of their T20 World Cup campaign. They were beaten by Australia by the margin of three wickets. The batting order of New Zealand performed well and scored 158 runs. Martin Guptill, Daryl Mitchell, and Kane Williamson scored runs but none of the above-mentioned batters could cross the 40 mark. James Neesham was the other batsman who scored 30 plus runs. We have no doubt that batsmen like Glenn Phillips, Martin Guptill, Devon Conway, Glenn Phillips, Kane Williamson, and James Neesham are strong when they come to the T20 format of cricket.

The bowling department of New Zealand is also strong and experienced when we look at their records. They have Tim Southee, Kyle Jamieson, Mitchell Santner, Trent Boult, Ish Sodhi, James Neesham, and even Todd Astle to handle the bowling department. Mitchell Santner was the highest wicket-taker in the warmup match who picked three wickets against 22 runs in four overs. Trent Boult was the other bowler who had two wickets to his name in the warmup match. He had played a lot of cricket in IPL here in the conditions of Sharjah and can be helpful. Tim Southee and Kyle Jamieson also picked wickets in the warmup match.

Babar Azam, Shaheen Afridi, and Trent Boult are key players to watch in this match.

The 19th Match of World Cup T20 2021 is going to be held at Sharjah Cricket Stadium, Sharjah. We had observed in the previous matches played here that the pitch here at this venue is good for batting. The track is slower than the others we have seen and helps the spinners quite a bit. We are hoping that the surface is bound to get slower and be a bit more difficult for batting in this match. A score of 170 is going to be tough to chase.

Who Will Win Pakistan vs New Zealand, 19th Match WTC 21