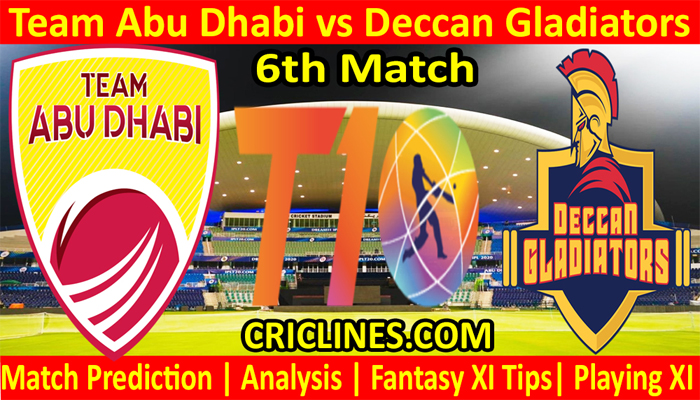 The world is ready to witness yet another big battle of the Abu Dhabi T10 League. The 6th match of the T10 League is scheduled to play between Team Abu Dhabi and Deccan Gladiators on Sunday, 21st November 2021 at Sheikh Zayed Stadium, Abu Dhabi. We are posting a safe, accurate, and secure today match prediction of Abu Dhabi T10 League free.

Team Abu Dhabi is coming to this match on the back of a massive win over Northern Warriors in their most recent match with a handsome margin of 21 runs. The performance of their batting order was just outstanding. They scored a total of 132 runs in their inning of 10 overs. The skipper, Liam Livingstone was the most successful and highest run-scorer from their side who scored 68 runs on just 23 balls. He smashed two boundaries and eight huge sixes during his inning.

Philip Salt scored 29 runs in the previous match. The bowling unit of Team Abu Dhabi also performed well in the previous match and defended the target of 133 runs and leaked 111 runs in their 10 overs inning. Danny Briggs was the most successful bowler from their side who picked two wickets in his four overs bowled out against just 15 runs. Marchant de Lange and Naveen-ul-Haq also picked two wickets each while Fidel Edwards had one wicket to his name.

Deccan Gladiators had beaten the strong team of this tournament, The Chennai Braves in their opening match with a handsome margin of 24 runs. The way how their bowling unit performed in that match was just outstanding. They scored 146 runs in their 10 overs. Almost all batsmen from their side put some runs on the board. Tom Moores was the highest run-scorer from their side who smashed the inning of 43 runs on just 17 deliveries with the help of two boundaries and five huge sixes.

Andree Russell also had an outstanding performance with the bat. He scored 43 runs on 17 balls with the help of three boundaries and four huge sixes. Tom Banton scored 24 runs. The bowling unit of Deccan Gladiators also performed well and defended the target of 147 runs and leaked 122 runs in their 10 overs inning. Wahab Riaz and Odean Smith picked two wickets each.

The 6th match of the T10 League is going to be played at Sheikh Zayed Stadium, Abu Dhabi. This venue has one of the flattest and completely dead tracks we have seen in the past. We are expecting a slow, flat, and good batting surface for this match. A score of more than 120 runs should be a par score.

Wahab Riaz, Chris Gayle, and Liam Livingstone are key players to watch in this match.

The dream11 team prediction for Team Abu Dhabi vs Deccan Gladiators 6th match T10 League. After checking the latest player’s availability, which players will be part of both teams, he possible tactics that the two teams might use as we had learned from previous seasons of T10 League to make the best possible Dream11 team.