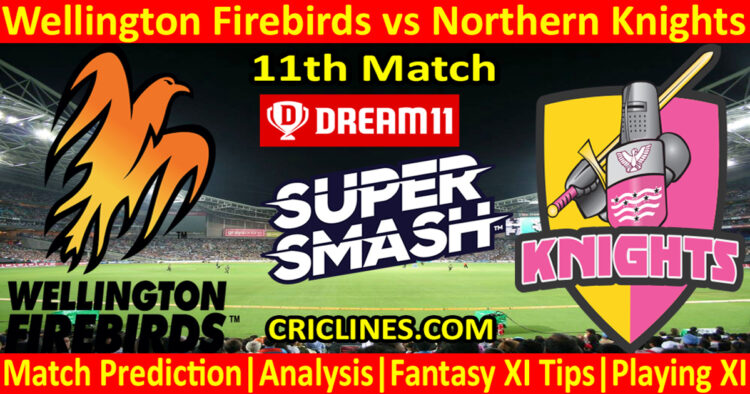 The world is ready to witness yet another big battle of T20 cricket. The 11th match of Super Smash League 2022-23 is scheduled to play between Northern Knights and Wellington Firebirds on Wednesday, 4th January 2023 at Basin Reserve, Wellington. We are posting safe, accurate, and secure today match prediction of Super Smash League free.

Wellington Firebirds had just been outstanding in this tournament and had not lost any match. They are currently the best-performing team of this edition of Super Smash League as they had won all three matches played and are leading the points table. Northern Knights had not performed well in this tournament. They had also played three matches with just one win to their name. They had lost two matches and are laying at the second position from the bottom of the ladder.

Wellington Firebirds had won three matches in a row and their most recent win came against Canterbury Kings with a handsome margin of eight wickets. They lost the toss and were asked to field first. The way how their bowling unit performed in that match was just outstanding. They leaked just 132 runs in 20 overs. The skipper, Peter Younghusband was the most successful bowler from their side with two wickets to his name in four overs against 21 runs. Rachin Ravindra also performed well and picked up two wickets in four overs while he was charged with 23 runs in four overs.

Nathan Smith was the other bowler with two wickets to his name in the previous match in three overs against 16 runs. Michael Snedden and van Beek picked one wicket each while McPeake was the only bowler who remained wicketless. The batting order of Wellington Firebirds also had an outstanding performance in the previous match and chased the target of 133 runs in just 11.5 overs with eight wickets in hand. Almost all batsmen from their side put some runs on the board. Finn Allen was the most successful and highest run-scorer from their side with 78 runs to his name. He faced just 37 balls and smashed nine boundaries and three huge sixes. Nick Kelly scored 24 runs while Rachin Ravindra remained not out after scoring 19 runs.

Northern Knights lost their most recent match against Central Districts by the margin of three wickets. This was a high-scoring match where they lost the toss and were asked to bat first. The performance of their batting order was just outstanding. They put in a total of 217 runs in 20 overs. Tim Seifert was the most successful and highest run-scorer from their side. He scored 59 runs on 30 balls with the help of nine boundaries and two huge sixes. The skipper, Jeet Raval also had an outstanding performance with the bat and scored 60 runs. He faced 29 balls and smashed seven boundaries and three huge sixes.

Katene Clarke was the other batsman who put some runs on the board. He scored 41 on just 24 balls with the help of seven boundaries and one huge six. Scott Kuggeleijn scored 27 runs and smashed four boundaries. Northern Knights lost the previous match due to the worst performance by their bowling unit. They failed to defend the target of 218 runs and leaked this target in 19.4 overs. Almost all bowlers from their side leaked plenty of runs. Mitchell Santner, Kristian Clarke, and Brett Hampton picked two wickets each. Kristian Clarke was charged for 44 runs in four overs while Mitchell Santner leaked 43 runs in four overs. Joe Walker picked up one wicket in two overs against 27 runs.

The toss can play an important role in the decision of this match as we had observed in the previous matches of this season of Super Smash League. As per toss prediction, the team who will win the toss may choose to field first.

The 11th match of Super Smash League is going to be held at Basin Reserve, Wellington. The pitch here at this venue should be good for batting as it is in most places around New Zealand. We should have a very high-scoring match is we get some warm and sunny conditions. A score of more than 190 runs should be as par.

The weather forecast for Wellington for today’s match is not good. There are some chances of rain but we are hoping that there will be no disturbance during this match.

We had provided you with the above-mentioned Super Smash League Prediction on the basis of our research, understanding, and analysis. These prediction tips have also based on the reports that we have from our different sources. You can consider the point we had provided you and in the end, the 11th decision will be yours.